UECLAA: Redefining Maps and Locations marked the launch of the Collection's online catalogue. This exhibition explored ideas of global and local, maps, spaces and places, and the ways in which these can be endlessly redefined.

In his Southern School manifesto, Uruguayan artist Joaquín Torres-García developed a ‘southcentric’ ideology of art that has influenced the development of art discourses in Latin America to this day. He condensed his idea in a drawing of the map of South America upside down. His intention was to de-contextualise the idea of a Eurocentric progression of the avant-garde and to highlight that the local is ultimately rooted in universal paradigms and archetypes. These local parameters nurture that universality with particular features: the multiple miscegenations or mestizajes which constitute Latin American artistic languages.

With this selection from its holdings, UECLAA explores the way in which globalisation stimulates continuous redefinitions of our sense of place. The multi-media cartographies presented here bring echoes of concepts such as the de-nationalisation of the modern and the uncertain nature of nationalism in a reality woven by mediated relations and multiple migrations. At the centre of the room, Jorge Macchi's artist's book Buenos Aires Tour, provides a starting point, a journey through a city from numerous different perspectives, but always with an eye to the extraordinariness of the ordinary, paradigmatic of this artist's practice.

León Ferrari also looks down on the world from above but his spaces are architectural ground plans filled with figures and furniture in nightmarishly close quarters that seem to be mocking the madness behind the idea of ‘social order’. Mónica Bengoa's photographs present details of human skin as if they were maps. Cristina Pape’s maps highlight the perverse relevance of gold in the definition and mapping of the new territories at the time of the conquest of Brazil. At another level Jaime Gili, a Venezuelan artist resident in London, uses the very British fashion for customised number plates to construct words in Spanish. 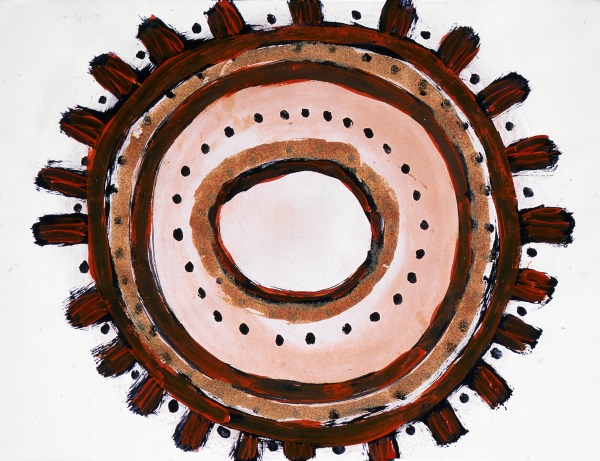 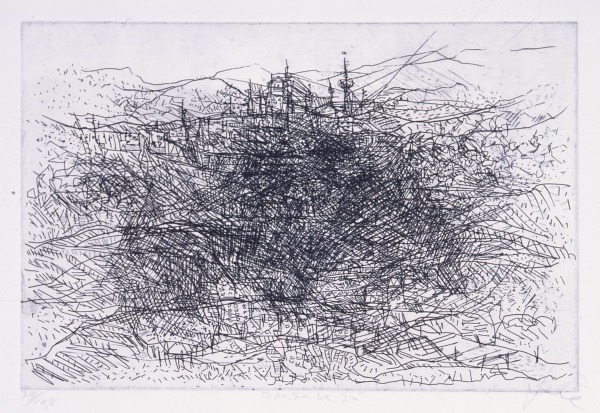 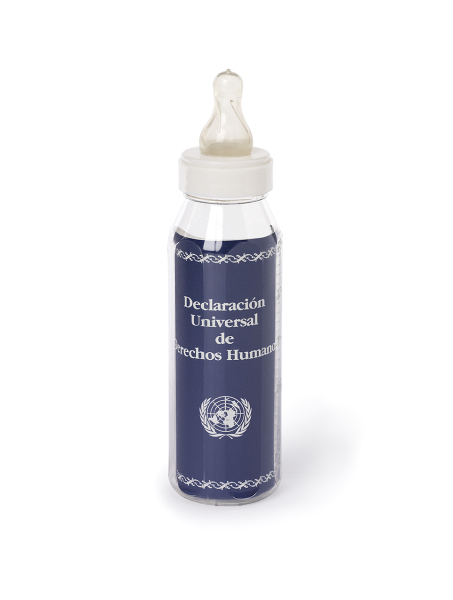 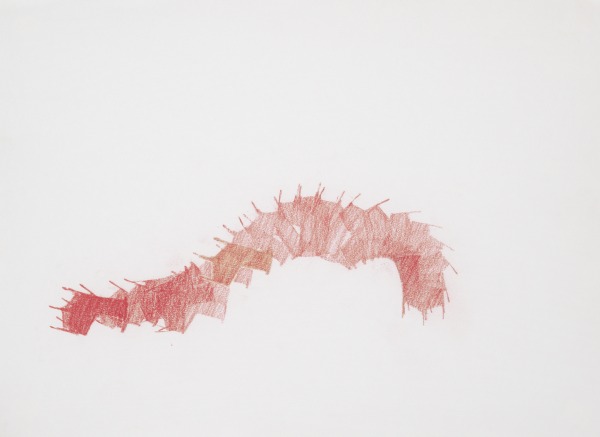 The April 2005 conference Four Lines: Creation. Collection. Education. Exhibition launched UECLAA Online, and situate the project in relation to aspects of the rapidly expanding field of theory and practice that comes under the rubric Latin American Art.

The final session The Latin American Artist in International Practice focuses on how artists both work and are represented within local, national and international contexts:

Four Lines also keys into our evolving relationship with Colchester arts organisation firstsite. UECLAA OnLine will be formally launched at the opening of the conference in the firstsite gallery, where the first solo exhibition in Europe by São Paulo based artist Nicolas Robbio will be on view.

As part of a new series of spotlight exhibitions at firstsite, Helena Lopes' twelve print series has been selected to complement the exhibition Nostalgia of the Body.

Starting from an examination of part of Lopes own body, 5=4+1 becomes a meditation on the creative power of the imagination and the entwining of touch and vision. 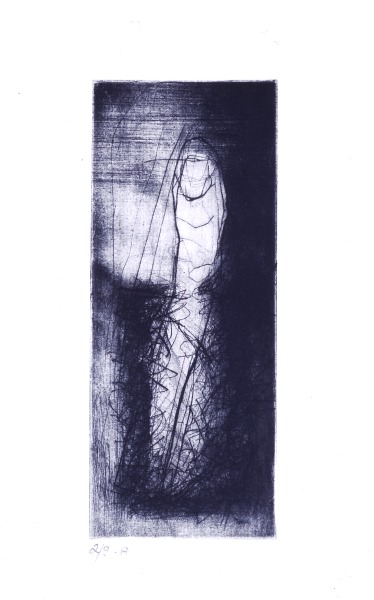 Nostalgia of the Body

The exhibition was conceived as a homage to the subtle, but undeniable, influence of the ideas of leading Brazilian artist Lygia Clark (1920-1988) on many contemporary artists from Latin America. Clark Developed a unique practice geared towards providing opportunities for participation of the individual in the work of art, downgrading the status of art objects and privileging experience; all still paramount concerns of current art practice.

The works in Nostalgia of the Body are inhabited by the same spirit of experimentation and self exploration found in Clark’s working methods. Furthermore, they invite us to navigate them with a sense of adventure. Their material qualities are intrinsically associated with the everyday, and their formal makeup with what Maurice Merleau-Ponty would call a ‘permanent condition of experience, a constituent of the perceptual openness to the world’, recalling the body either by scale, interactivity or association. 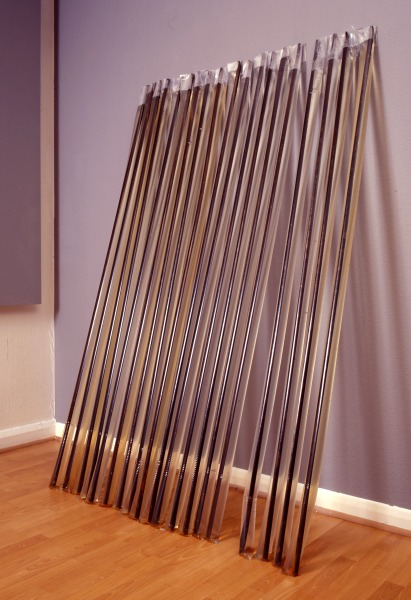 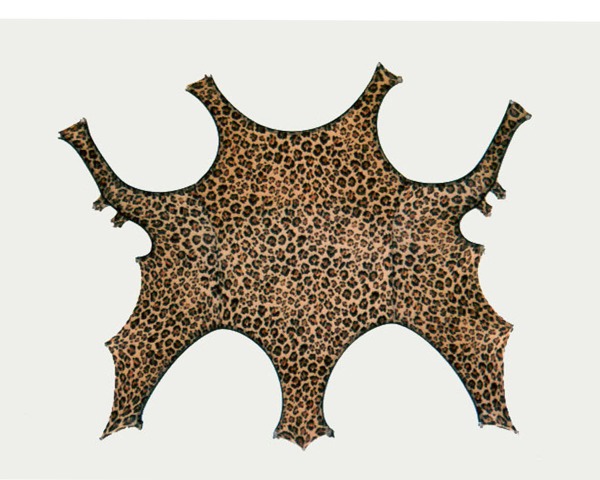 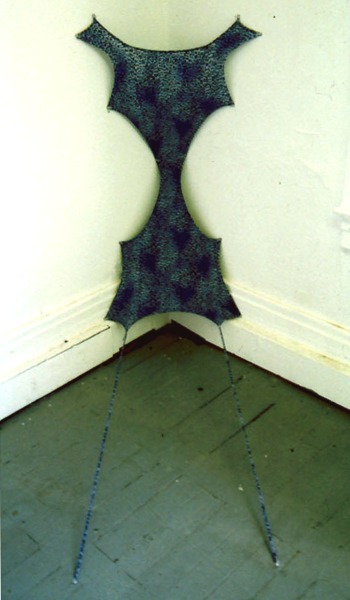 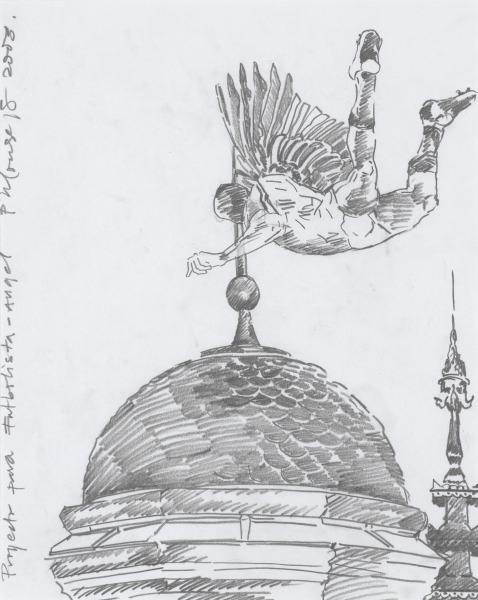 This exhibition presents new donations alongside some other remarkable works in the collection. The selected pieces challenge our perception of reality by questioning its limits and altering traditional ways of representation.

These alterations occur in different ways: by the employment of unusual materials, the subversion of the technical rules linked to a particular medium, or the manipulation of symbolic meaning. These works offer an opportunity to re-think reality from different view points. The works in the exhibition are by Albano Afonso (Brazil), Nora Aslan (Argentina), Maria Elvira Escallon (Colombia), Maria Ezcurra (Mexico), León Ferrari (Argentina), Siron Franco (Brazil) and Eduardo Kac (Brazil).

Maria Elvira Escallon's photographs from the ongoing series Nuevas Floras (New Flowers) record sculptural interventions on trees which unfold in time. The carvings are realised on one side of the branches transplanting art historical references to the environment as well as subverting notions of man-made and natural shapes.

Maria Ezcurra's Blue- and Leopard Swimming Suit installations create unease - or perhaps laughter- by subverting the use of garments, in this case stretched women's swimming suits, turning them into wall-based or sculptural objects that retain memories of the human body.

León Ferrari's Caligrafia (Calligraphy) is a written drawing which uses as its starting point the transcription of a press cutting referring to routine updates on government policies. The curvilinear shapes of the handwriting are more evocative of intricate drawing than of calligraphy, taking the viewer away from that which is its source: a simple piece of newsprint.

Albano Afonso's reinterpretation of great master paintings produces an alteration of the original works through the employment of photography, simple lighting techniques and montage. The painting he reworks here is The Cheat by the 18th century French painter Georges de La Tour. In O Impostor apos La Tour (The Imposter after La Tour) the image is composed of four self portraits taken by the artist in his studio and shot at low speed. The artist himself enacts all the characters in the source painting to compose the original action: a game of cards where cheating is taking place.

The collage from the series Ventanas Chinas (Chinese Windows) by Nora Aslan produces a contradictory perception depending on the position of the viewer's body. At distance, the work looks like the architectural design in an oriental window, but on close inspection we are confronted with a myriad of images. The kaleidoscopic composition is made up of small photographs of endangered species and polluted urban landscapes, identifying the self-destructive effect of so-called evolution.

Siron Franco's Casulo (Cocoon) is a human size cocoon made of unusual materials including human hair, insect bits, clay and pigment. The sculpture hangs from the ceiling like a sinister crysalis with an oversized insect growing inside its protective shield, soon to break free and start to fly. The scale and materials employed in this piece are disorientating in the context of the gallery space.

Holo/Olho (Holo/Eye) is the first of Eduardo Kac's holopoems: language works produced using the medium of holography. The work consists of a holographic image of the words HOLO (holo) and OLHO (eye), which is activated by light reflection. Like cinema, holograms are concerned with time and movement. The difference between them is that instead of images being projected in quick succession onto a single screen, the different shots within each hologram are projected through a singular filmic surface.(1) This surface simultaneously records a series of different images - in the case of Kac's holopoems, words - from different points of view. Each holopoem thus compresses a substantial amount of recorded time in the form of different sequences of letters, a form of subverted time which can be perceived only when one moves around it. 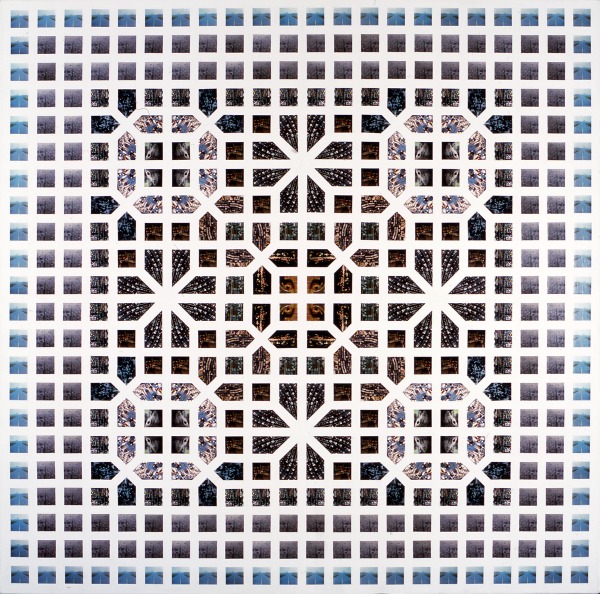 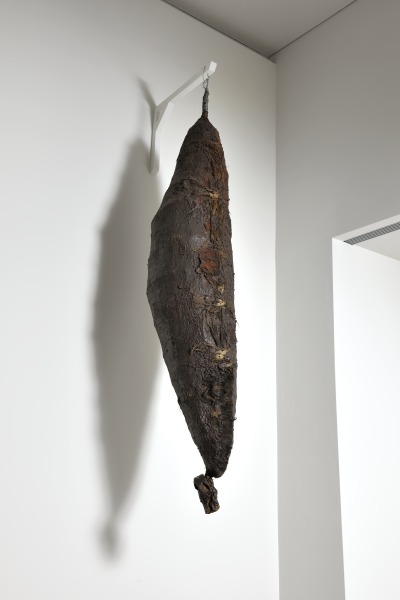 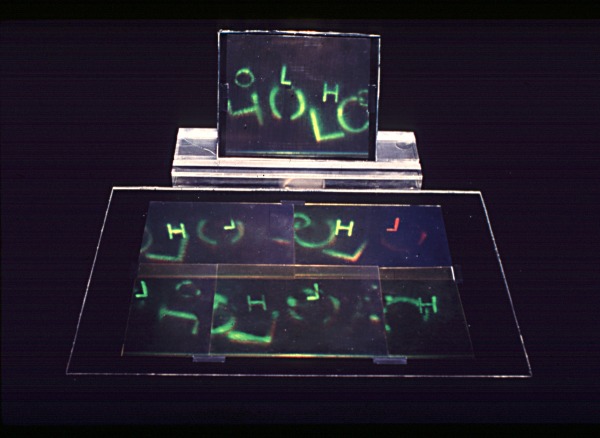 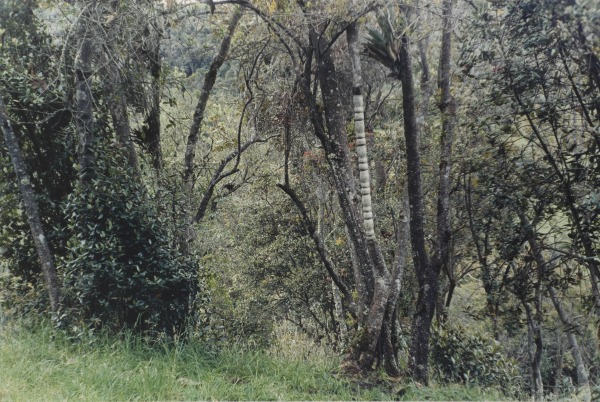 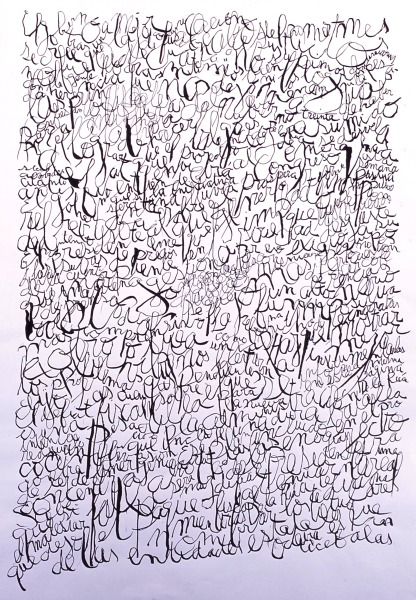 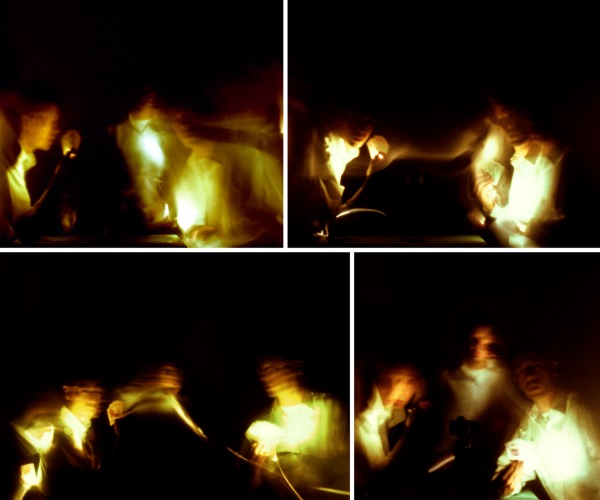